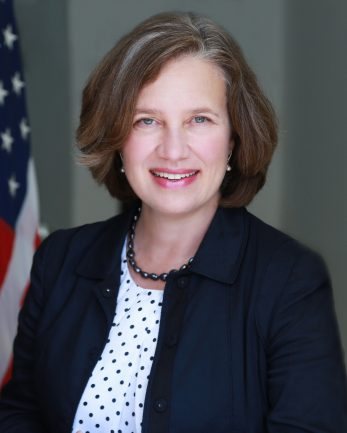 Colleen Hyland joined the U.S. Mission to the OECD in September 2019. She came to Paris from Pristina, where she served as Deputy Chief of Mission in her second assignment to Kosovo, having previously served as Political and Economic Counselor 2007 to 2009.  Previously, Ms. Hyland was Deputy Director for Bilateral Trade Affairs at the Department of State.  Overseas, she has served as Deputy Coordinator for Economic and Assistance Affairs in Kabul, Political and Economic Counselor in Ljubljana and as an economic and consular officer in San Salvador and Guayaquil, Ecuador.  In other Washington assignments, Ms. Hyland served on the staff of the Assistant Secretary for European Affairs, as desk officer for Croatia, as bilateral trade officer for the Middle East and Africa, and as Deputy Director in the office of Iraq Economic Affairs.

A career member of the Senior Foreign Service, Ms. Hyland graduated from Mount Holyoke College with a degree in European Studies and received an MA in Security and Strategic Studies from the U.S. Naval War College in Newport, Rhode Island.