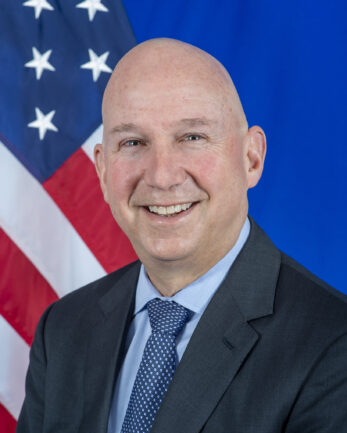 Jack Markell became the U.S. Representative to the Organization for Economic Cooperation and Development (OECD), with rank of Ambassador, on January 14, 2022.  Markell previously served as the White House Coordinator for Operation Allies Welcome where he worked to ensure vulnerable Afghans who passed screening and vetting reviews were safely and effectively resettled in the United States.  Markell also served two terms as Governor of Delaware from 2009-2017, Chair of both the National Governors Association and the Democratic Governors Association, as well as President of the Council of State Governments.

During his tenure as Governor, Delaware emerged from the great recession with the strongest job growth in the region and among the best private sector wage growth in the country.  Governor Markell led significant investments in improved early childhood education, language immersion programs, heightened college access for low-income students and some of the most aggressive workforce development efforts in the country.  Previously, he served ten years as Delaware’s State Treasurer.

Prior to public service, Governor Markell served as senior vice president for corporate development at Nextel, among other positions in the private sector, including at Comcast Corporation and McKinsey and Company.  Governor Markell served on the boards of a number of publicly-traded and privately held corporations as well as on a number of non-profit organizations including Upstream USA, Delaware State University, Annie E. Casey Foundation, and Jobs for America’s Graduates. He is a Henry Crown Fellow and a Rodel Fellow at the Aspen Institute.

Governor Markell was born in 1960 in Newark, Delaware. He earned an undergraduate degree from Brown University and an MBA from the University of Chicago. He and his wife Carla have two children, Molly and Michael, who are in their 20s.